Skip to content
Carnivore Style may contain affiliate links. When you click these and purchase products from it, we may receive a commission. Learn more here.
Written by Timothy Woods
Last Updated on February 2, 2021

This podcast features Amber O’Hearn who is a data scientist by profession and has written publications in mathematics, psychology, and linguistics. She has been analyzing and experimenting the effects of ketogenic diet and has since followed a plant-free diet since 1997 after she discovered its positive effects on her cognition and mood.

As she explains the carnivore diet (read this article), she mentions that she only eats when she’s hungry. On a typical day, she eats about two times – once during lunch and another during dinner. She also explains mentions how most of us are taught to eat more fruits and vegetables since they are the healthiest and that meat and eggs can cause health problems.

However, it is discovered that fiber is a micronutrient that is actually difficult for our bodies to digest, so it stays in our system at extended periods. In ancient times, people survived on meat since there is a limited access to vegetables but have lived a healthier life. Eating all meat has a more likely chance to make a person feel satiated and full longer and that the process is similar to ketogenic because it involves less carbs and more fat; but in this case, added proteins as well.

She explains that the reason more and more people are following the carnivore diet is because it helps to lose weight faster and safely. She also explains here how to source or look for the best meat quality when on this diet and if eating only meat can speed up aging.

Is Eating Smoked Meat Bad for You?
An In-depth Analysis

Is Eating Smoked Meat Bad for You?
An In-depth Analysis 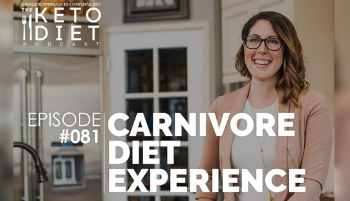 What is the Carnivore Diet?
How to Get Started on the Lifestyle?

What is the Carnivore Diet?
How to Get Started on the Lifestyle?

Carnivore Diet Food List
The Foods You Can & Can’t Eat

Carnivore Diet Food List
The Foods You Can & Can’t Eat

Carnivore Diet Side Effects
What Are the Symptoms, Risks & Dangers?

Carnivore Diet Side Effects
What Are the Symptoms, Risks & Dangers?