Dr. Jordan B. Peterson is a professor of psychology at the University of Toronto, a clinical psychologist and the author of the multi-million copy bestseller 12 Rules for Life: An Antidote to Chaos, #1 for nonfiction in 2018 in the US, Canada, the UK, Australia, New Zealand, Sweden, the Netherlands, Brazil and Norway, and now slated for translation into 50 languages.

With his students and colleagues, Dr. Peterson has published more than a hundred scientific papers, advancing the modern understanding of creativity, competence, and personality, while his now-classic book, Maps of Meaning: The Architecture of Belief (released in June 2018 as a now bestselling author-read audiobook) transformed the psychology of religion. Peterson was nominated for five consecutive years as one of Ontario’s Best University Lecturers and is one of only three profs rated as “life-changing” in the U of T’s underground student handbook of course ratings. 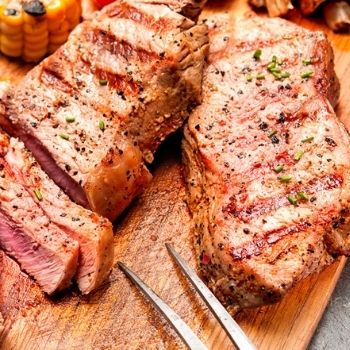 In 2016, shortly before the publication of 12 Rules, several of Dr. Peterson’s online lectures, videos and interviews went viral.

This incident launched him into unprecedented international prominence as a public intellectual and educator.

Peterson shared the story of how his daughter who had severe arthritis and was severely depressed influenced him to try carnivore diet after she saw some health improvements to her body.

When he started to cut out most of the food groups into his diet and just left beef, salt, and water in his diet, he saw that the symptoms of his depression, which he had when he was only 13, was gone. He could now wake up in the morning, feeling satisfied and fulfilled.

Aside from the physical health and mental improvements that he is currently enjoying, he also lost seven pounds a month for seven months. He felt younger and stronger, and he gained his weight back when he was 26. He also felt that his gum problems were also gone.

He said that his appetite also went down to 75%. After he avoided eating carbohydrates for about a month, his cravings for carbohydrates also went away with it. It is also worth mentioning his observation on how the body became reactive to almost everything after he tried the diet. By Timothy Woods 3 years ago
How to Start the Carnivore Diet?
20 Experts Share Their Tips