What is Picanha? | 7 Important Facts About it

If you’ve visited a churrascaria or a Brazilian steak shop, for sure, you’ve had a bite of this delicious cut called picanha on the menu. If you haven’t tasted it yet, you’re missing out big time. But, what exactly is picanha? What makes it a slice of delectable grilled meat?

Picanha is a Brazilian delicacy cut from the butt of the cow, directly above a fat cap. In the United States, this is often called the cap rump or round. In the US, it is considered one of the best in top sirloin.

These steaks are often confused with a tri-tip sirloin, but they are different. Picanha is smaller and closer to the fat cap, which makes it more flavorful.

You can find this from the cap or coulotte situated above the rump cover and top sirloin. The fat side is closest to the capping muscle, which makes this different cut so flavorful. In general, the closer a cut of meat is to the rump area, the more tender it will be.

2. Is Tri-Tip The Same as Picanha?

Both meat cuts come from the same area, but they are slightly different in size. The smaller side is the picanha steak. In the US, the smaller section is sometimes called the coulotte, top sirloin cap, or rump cap. The direct translation is closest to the name rump cap. This steak layer has less of a marble grain and is less flavorful.

Picanha tastes like sirloin steaks. They are tender and juicy. Since this part sits on a fat cap, it retains even more tenderness, especially when thrown on the grill mats. When cooking this steak, we recommend following a traditional North American recipe. It will include the type of season and method you should use. 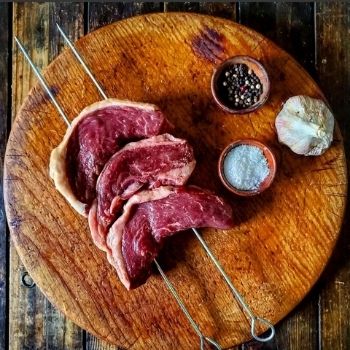 The Picanha cut is so good because it has a lot of fat that sits underneath, which adds tenderness. Brazilian picanha, also known by the name top sirloin cap, has a rich beef flavor.

It tastes better when it is done on the grill. The layer of fat that the steak sits on top of makes the meat tender and juicy.

Most butchers will leave this fat layer on the steak picanha when cooked to give it a better texture and taste.

When it comes to steaks, the more fat on the cut, the more tender it will be. [1]

5. Can you eat Picanha fat cap?

In Latin American countries, the fat on the steak is cooked and eaten with the rest of the meat. In the United States, some butchers will remove the fat. From our experience, Picanha is best served with the fat cap included to retain the most flavor and marbling when cooked on the grill.

6. What is The Best Way to Cook Picanha? 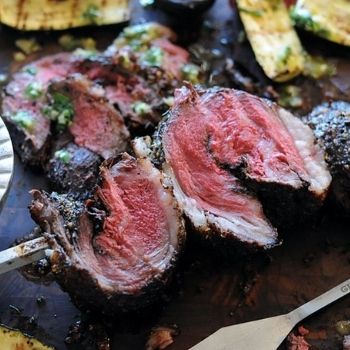 Most people will agree that the best way to cook picanha is by searing it on the grill.

A Brazilian grill recipe will sometimes recommend using a skewer to ensure that you don’t overcook it.

The most popular recipe only requires minimal seasonings like salt and pepper.

It is often served on a long skewer at Brazilian restaurants, but for home cooking, you can use small ones. You should season your steak with two ingredients; salt and pepper.

These are the two basic seasonings that will bring out the best flavor of the top sirloin cap. You can include other herbs, but they aren’t a necessity.

7. What to Serve With Picanha

Picanha steaks have a salty flavor, so they are best served with savory side dishes. Some popular side dishes include white corn, beans, grain, and potatoes. In Brazil, they serve this cut with a chimichurri sauce.

Churrasco is the term given to Brazilian meat or beef cuts grilling. One recipe will look different from another depending on the region. In many Churrasco style meals, you will serve the cut of meat with black pepper, salt, and herbs.

So, Is Picanha Worth It?

With its tender texture and juicy flavor, Picanha is a cut of beef that's worth every penny. The fact that it's difficult to find here in the US makes it even more valuable.

However, you'll be surprised at how inexpensive it can be. The first time the Carnivore Style team got to taste this flavorful cut, we couldn't get enough. It's been a mainstay on our regular cookouts ever since.

Blog 2 years ago
Where to Buy Picanha?
Everything You Need to Know

Guides 1 year ago
How Long Should You Marinate Chicken?
Everything You Need to Know

Blog 3 years ago
Why Is World Carnivore Month January?
What You Need To Know
No form found