Though they come from neighboring parts of the hog, pork shoulder and pork butt are two different cuts of pork.

The difference in cooking time, flavor profile, and price make them suitable for different purposes.

I've been cooking both cuts in competition for more than six years, so I will break it down so you can decide which cut is right for your needs.

Pork butt is one of the most popular cuts of pork from the shoulder region. It is sometimes called Boston butt, and it is a cut of meat that comes from the top of the pig's shoulder, closest to the spine.

Pork butt is well marbled with intramuscular fat, which makes it more succulent than many other cuts of pork.

This type of pork has an even, rectangular shape and uniform surface area.

They sell it often with the fat cap intact. This makes it an ideal cut to smoke, and it results in large portions.

Pork butts have been popular among barbecue enthusiasts for a long time, as they make for excellent pulled pork sandwiches when cooked low and slow. Because of the extra fat content, it can be slow cooked without drying out, as some cuts may do. 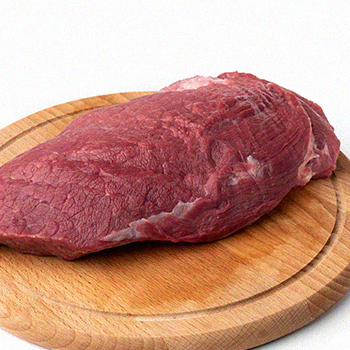 Pork shoulder, also known as "picnic shoulder," "picnic ham," or "picnic roast," is a versatile cut of meat that can be used in many different dishes.

It has a deep, rich flavor, and it is often used in an outdoor cooking process like barbecue because it becomes tender when cooked slowly.

Pork shoulder comes from the top part of the leg, well below where the pork butt arises.

It has a triangular, tapered shape. Butchers often sell it in netting with the fat cap in place and the skin on.

The shoulder is a well used muscle without the same fat and connective tissues of a Boston butt.

This means the cut has less marbling of fat than pork butt does.

This cut of pork is versatile, being used in pork roast, pork slices, or pulled pork. Any slow cooking method will bring out the flavor of this cut.

Where Do They Come From? 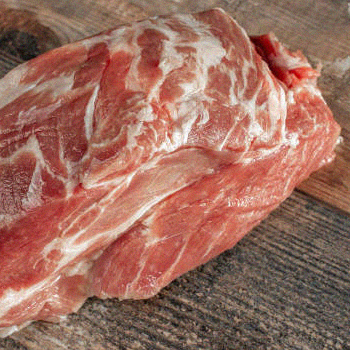 Let's start with the basics.

Both pork butt and pork shoulder come from a shoulder cut of the pig’s front leg. That is right, pork butt doesn't originate anywhere near the rear end.

That being said, these two types of pork arise from different muscle groups despite arising from the same area and same primal cut [1].

Although these two sub primal cuts both come from the front shoulder, pork butt is a cut of pork that comes from the upper part of the shoulder near the pig's spine

This muscle is not well-exercised, allowing the muscle to infiltrate with a substantial amount of fat.

Pork shoulder is lower than pork butt, in a region of the shoulder that is far more active.

The leg muscles' exercise leads to a leaner cut of meat with less marbling than the pork butt has. There is less intramuscular fat, which means it must be cooked properly to get a tender piece of meat in the end

What Are The Differences In The Cuts? 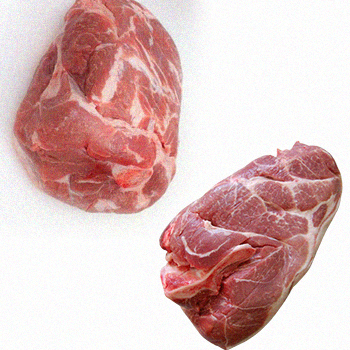 Pork butt usually has the skin removed since there is so much fat within the meat.

It comes in a uniform shape and rectangular cut because it sits above the shoulder blade behind the pig’s head.

On the other hand, the pork shoulder has a triangular shape because it runs along the pig's shoulder blade.

It is both sold bone in or bone removed, and either are excellent for cooking - no need to remove the bone. Additionally, a professional butcher will usually leave the skin on this cut with an irregular shape.

This muscle is not well-exercised, allowing the muscle to infiltrate with a substantial amount of fat.

Pork shoulder is lower than pork butt, in a region of the shoulder that is far more active.

The leg muscles' exercise leads to a leaner cut of meat with less marbling than the pork butt has. There is less intramuscular fat, which means it must be cooked properly to get a tender piece of meat in the end

What Are The Cuts Used For?

Pork butt and pork shoulder are two popular cuts of shoulder meat that can be used in a variety of ways.

Their versatility allows them to make many dishes.

Pork butt is generally a more tender meat than pork shoulder, because Boston butt has a higher fat content. When cooking pork butt low and slow, you end up with a moist and delicious dish.

You can stew, smoke, roast or braise pork butt and get meat that pulls apart in your hands - great for making pulled pork.

“If I had to narrow my choice of meats down to one for the rest of my life, I am quite certain that meat would be pork.”
-James Beard, Chef

Pork shoulder has a wider variety of uses. Because it is tougher than pork butt, it can be sliced or shredded.

Low and slow cooking methods are also one way to go when making pork shoulder recipes.

But you can look at grilling, braising, stewing, and roasting as other ways to serve pork shoulder.

Additionally, since pork shoulder comes with the skin attached, you can use it for any fresh recipes that would taste even better with crackling crisp skin. In fact, the crispy skin and crusty exterior are reasons picnic ham is so popular.

Which One Costs More? 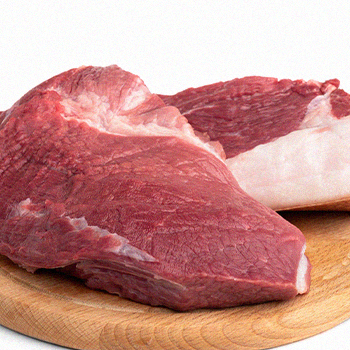 Although prices vary from region to region, on a per pound basis, neither of these cuts is generally priced significantly higher than the other.

Depending on your butcher shop or grocery store, one may cost more than the other - but there will not be a huge difference between the two cuts.

That being said, if your pork shoulder comes with the bone, it will usually cost less than pork butt. This is because it is unfair to charge for unusable weight.

The major price variation will be due to the weight of the pork. Butt tends to come in much larger sections than picnic shoulder, so you will pay more for that bigger cut of meat.

Which One Is Better?

Well, there is no cut of pork that is better than the other. Both butt and pork shoulder are scrumptious. It really depends on what you are cooking and what you are trying to do with your meat.

Pork butt makes amazing pulled pork. If you are looking for moist meat that has the perfect amount of fat...cook pork butt and you can't go wrong. However, that is pretty much the one thing this cut is known for.

“Pork - no animal is more used for nourishment and none more indispensable in the kitchen…”
- Alexis Soyer, Chef

Pork shoulder, on the other hand, provides a wider array of menu options. Like Boston butt, it can make good pulled pork.

However, pork shoulder also can easily be used in a wide variety of dishes.

Whereas you would need to brine and salt a pork butt before making a dish like carnitas, you can cook pork shoulder carnitas with no prep work at all [2].

Furthermore, you can use pork shoulder in other dishes like pork roast or Chinese stir-fry.

In the end, pork butt is an excellent cut of meat that should not be discounted as inferior or less flavorful than pork shoulders. Both are delicious cuts of pork - but they require slightly different approaches to their preparation.

Pork is a meat that can be versatile and diverse, depending on the cut.

Pork shoulder and pork butt are similar cuts of meat, but they're not the same thing. The distinction of where they originate makes for important differences in texture and flavor when cooking these two meats.

Pork butts may be more flavorful because they come from farther up on the animal, where there's more fat marbling between muscle fibers.

Meanwhile, pork shoulder is leaner with less fat content, which can dry out easier during cooking. Thus, you'll want to cook it at low temperatures or braise it for longer periods of time.

Knowing what you want to do with these cuts will help you keep your next barbecue interesting.

Meat Delivery 2 years ago
Omaha Steaks Vs Kansas City Steaks
Which One Is Better?

Meat Delivery 2 years ago
Allen Brothers vs Omaha Steaks: Which One Is Better?

Grills 1 year ago
Cast Iron Vs Stainless Steel Grill Grates
Which One is Better & Why?

Griddles Grills 1 year ago
Grill vs Griddle
Which One is Better & Why?

Blog 1 year ago
Flank Steak Vs Skirt Steak
Which One is Better?