Someone a lot wiser than me once said that “if it were easy, they wouldn’t call it an elimination diet.” But the reality is that whenever you make drastic changes to your lifestyle, there will be some negative side effects.

When you're on a high-fat carnivore diet, what you need to understand and work out for yourself, is whether those downsides are worth all the benefits you can get from a pure carnivore diet.

First, let’s take a look at what will actually happen in your body.

What Happens When You Start The Carnivore Diet?

Most people who plan on starting the carnivore diet think that it’s simply turning the food pyramid on its head. Basically, just eat meat, and then less of all the other stuff, especially high-carb food. It's similar to a keto diet.

I was  one of those people myself, and it came as quite an awakening that I was going to eat meat and nothing else, really. It isn't like any regular low-carb diet. The carnivore diet means a long-term commitment to losing weight or other health-related reasons.

The initial reaction you might have is the carnivore diet must be unhealthy and full of all sorts of  long-term problems. After all, you'll only be eating red meat and no more plant-based food. This is where we need to clarify a couple of things.

Yes, there are negative side effects during the phase where your body and metabolism are adapting while on the carnivore diet to lose body weight. A lot of people call this period the “trough of despair” or just the “trough.”

You will encounter some flu-like symptoms as your body is starved of carbs in a long-term carnivore diet.

Your blood glucose is drained, and any glycogen reserves, even a small amount of it,  are tapped into as well. Once this happens, your body will actually go into a kind of panic mode, including a quick boost of the blood sugar levels.

However, once your body adapts to breaking down fat storage and releasing ketones into your bloodstream, then those symptoms from a carnivore diet will reverse and completely go away.

Essentially, you encounter the very same physiological effects that people on the low-carb keto diet experience.

What frustrates me most about critics is that they jump on all these carnivore diet symptoms to claim that “Aha, see all these side effects from eating meat for weight loss? That’s proof that your body is resisting and telling you to stop this meat-based diet.”

None of those critics will have actually gone through this period; otherwise, they would know that it’s temporary, exactly how it is when you're on a ketogenic diet.

And when you come out on the other side, you will feel better and more energized than ever before.

Symptoms Of The Adaptation Period

My personal experience from going through cyclical carnivore diet phases has resulted in the below list of main negative side effects. [1]

Here’s what to expect during a carnivore diet:

3 Major Adaptations Your Body Will Undergo:

When you make a major dietary adjustment, then those come with a lot of changes in your body. This is especially the case if you’ve led a less health-conscious lifestyle.

For this carnivore diet specifically, 3 significant things will happen that you should be aware of.

Before you get overly excited that you see massive weight loss in the first days to 2 weeks of your carnivore diet, a lot of this will be shedding of retained water. As your glucose levels drop, your body will tap into glycogen reserves.

And because each gram of glycogen ties to 3 grams of water [2], you can easily lose weight from flushing out 4 to 6 pounds of water.

2. Transitioning To Fat From Sugar For Energy

While it is the default and favored method due to the easy metabolic absorption, it’s also the reason we get fat.

So, once you remove all sugar from your nutrition through a carnivore diet, fat will become the source of energy. And if your diet doesn’t supply enough, then those love handles will be targeted. Until that process happens, you will feel like you’re drained of your usual energy. Even a small amount of work will make you initially tired.

Some of the most significant health benefits come from no longer being reliant on carbs, especially sugar, for your energy needs.

Another benefit of no more sugar is that it has been reported to reduce the inflammation associated with arthritis [3]. It’s not something I have personal experience with, but I have heard this report from several carnivore diet enthusiasts I’ve met who are also on the carnivore diet.

One of the negative carnivore diet side effects is mood swings and irritability. A lot of this stems from the fact that your hormones will fluctuate, especially Cortisol.

Because your body will initially interpret the lack of carbs from plants as a sign of starvation, it will increase cortisol levels to try and boost blood sugar levels.

However, this hormone is also closely related to stress and anxiety. Sudden fluctuations can make you moody, but this will pass within a few days. If you've previously been on low-carb diets like the ketogenic diet, you'd know exactly how it feels.

The above physiological impacts can also have some mental carnivore diet side effects to be aware of.

Most people just think of brain fog when it comes to the adaptation phase before hitting full ketosis. While this lack of mental focus is prevalent and somewhat annoying, it’s not the only carnivore diet side effects.

Basically, your digestive system is going to send signals to your brain, saying, “Hey, what are you doing? We could be starving here.”

Before plant foods and carnivore foods became abundant in human history, this was a very dangerous situation to be in -- so the natural brain response is stress and anxiety to signal that immediate action is needed.

If you’re anything like me and have a bit of a sweet tooth, then you could quickly start noticing withdrawal-like symptoms after adapting a carnivore diet.

This is very similar to what drug addicts experience, even if it’s not as severe. Because sugar is such an easily accessed form of energy, your body will get very used to it as fuel, and when it suddenly disappears, it thinks that something vital is missing.

The Mayo Clinic says your cholesterol ratio is a better risk predictor than total cholesterol or LDL. To find it, you divide your total cholesterol number by your HDL score. That gives Munsey a ratio of 3.6 to 1. As 3.4 is considered optimal, he’s in a very healthy range.

In the first few weeks of the carnivore diet, you’ll likely get regular cravings for carb-rich foods. This could be anything - from sweet foods like cake or a cinnamon bun to plant foods like a humble potato.

One of the main reasons for this is that your body is still struggling to get all the energy from fat. The best solution to a carb craving is to boost your animal-based and high-protein fat intake instead.

Read more: What Are Meat Sweats?

Tips And Tricks To Survive A Meat-Only Diet:

Unfortunately, there is no easy road to weight loss or muscle gain, and in many ways, you can argue that the more difficult the task might seem, the better the results will be. That doesn’t mean there aren’t a few things you can do to reduce the discomfort. [4] 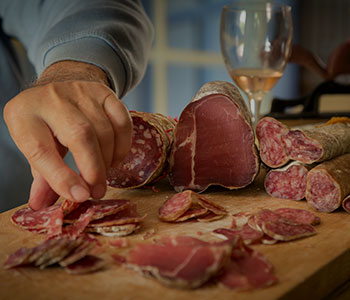 Feeling hungry in the first couple of weeks is not uncommon while on a carnivore diet, and the last thing you should do is ignore it.

You can do one of two things. Either eat more meat or eat better quality meat.

If you buy grass-fed beef, for example, you will get more nutrient-dense foods from the same amount of volume, and the result will be less hunger and cravings.

You should also try these meat delivery services:

Many carnivore diet symptoms can be tied back to low energy levels, and the best way to refuel is to increase the calories and nutrients you get from meat. 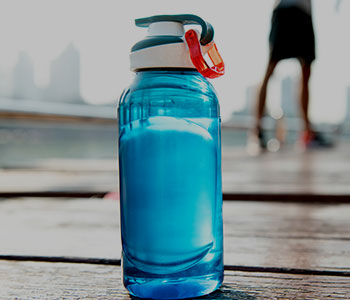 I already mentioned above that in the first few days, you would lose weight through glycogen reserves being a target for energy.

This process alone can remove 4 to 6 pounds of water that need to be replenished, but you will also lose a load of sodium, which will cause further dehydration.

At a minimum, aim for one pint of water with 3 meals a day, and 2 extra pints in between. 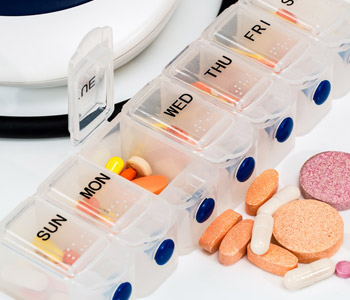 You can keep track of all the nutrition from minerals to proteins and animal fat, but judging your electrolyte intake can be a little more complicated.

Salt generally has a terrible name, and most people believe you should keep it to a minimum when on a restrictive diet.

That’s fine when your diet is very diverse and includes many different vegetables that include just enough electrolytes to give you all you need for the day.

But another option is to get a more diverse range of these essential minerals through supplements. Take a few servings, and you’ll be all set with less guesswork involved. 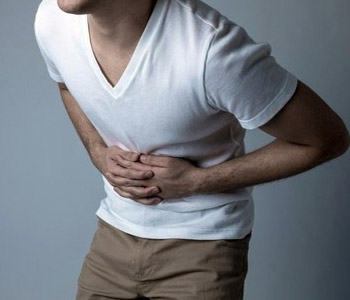 While on a carnivore diet, the digestive system problems that can occur are probably the most disruptive.

I found them more difficult to live with than a couple of days of brain fog and low energy. Some people I have talked to over the years suffered from bloating and constipation while on a carnivore diet.

But, the far more common issue is carnivore diet diarrhea. This is because your gallbladder is not producing enough bile to deal with the increased amounts of fat.

Solution is to take some supplements like Lipase or Betaine HCL. You can buy these supplements and take them just before eating.

Can the carnivore diet cause constipation?

This is because most of the meat is actually absorbed with less waste product being left over.

Yes, the carnivore diet can increase cholesterol levels, but it’s important to look at which types actually increase.

Some tests have shown that a meat only diet will actually lower the bad cholesterol and increase the good to end up with a much more positive ratio.

Will overeating meat cause kidney problems?

No, eating too much unprocessed meat will not cause kidney problems. It’s generally the processed meats that are very high in preservatives like salt, and excessive amounts of salt can cause kidney issues as they struggle to flush the excess out.

However, processed foods are not recommended on the carnivore diet.

Should You Be Worried About The Side Effect?

At this stage, you should have a full picture of all the carnivore diet side effects.

I’ll be the first to admit that they aren’t all that pleasant, but with the above information to help identify and deal with them, my first attempt would have been so much easier. [5]

But in my opinion, the benefits certainly outweigh these temporary symptoms, especially if your goal is to prevent weight gain.

Don’t let them deter you and give the carnivore diet a try.

If you are looking for a way to get into the carnivore diet, we recommend trying out ButcherBox. It's the best meal delivery service we've tried. 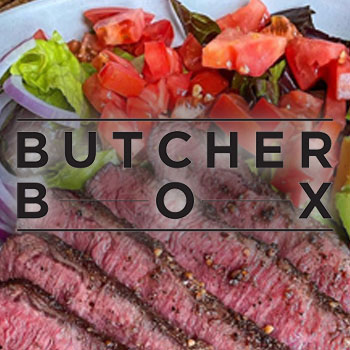 Blog 2 months ago
How Long Can Raw Meat Sit Out? (5 Important Signs & Dangers)

Blog Smokers 1 year ago
Should You Smoke Brisket Fat Side Up Or Down?