The brisket, a notoriously difficult cut of meat to cook. Mastering a great brisket takes preparation, time, and a lot of patience. If you go into it blindly, you’ll just end up with a chunk of beef jerky, wasted time, and wasted effort.

Don’t let that put you off though - pitmasters alike can agree that it is more than worth it in the end, for that crispy, juicy brisket.

Of course, first, you need to know when, how, and even why you should wrap brisket. That’s why, as experienced brisket cooks, we have put together everything you need to know about wrapping, cooking, and smoking a brisket.

When You Should Wrap A Brisket? 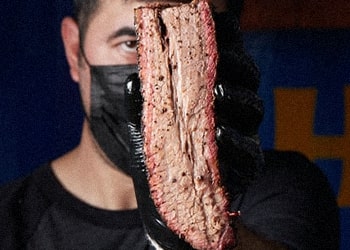 I should begin by saying, there really isn’t a straightforward answer.

Before you click off in defeat, don’t fret. I’m here to guide you down the smoked brisket road, and to a juicy beef brisket in no time.

When wrapping a brisket, there are 3 things you should consider:

Naturally, a bigger brisket will take longer to cook than one on the smaller side. This is because smaller meat briskets lose moisture much quicker than bigger ones.

The main reason to wrap brisket is to prevent your meat from losing moisture, therefore smaller meat should be wrapped earlier in your cook.

We recommended wrapping an 8-pound brisket around the 3 - 4 hour mark, whereas a brisket around 12 pounds should be wrapped closer to the 6-hour mark.

You’ll also want to take into consideration how hot you usually run your smoker. Otherwise, you might end up with too much smoke.

A higher temperature means a faster cook, which means you’ll get to wrapping your brisket much quicker than a slow cook.

Recommended Articles: How to Regulate Temperature in a Smoker

Just like any cooking process, a lot of wrapping brisket techniques relies on your personal preference. At the end of the day, you’re the one that will eat the barbecue, so you know how you best like your meat.

Most pitmasters recommend wrapping your meat when your smokers reach an internal temperature of 165 - 170 F.

Now, not everyone has the patience to wait that long. So, some people may prefer to wrap brisket as soon as the stall hits (usually around 145 - 155 F.) It may be the fastest method, but not guaranteed the tastiest.

Now, if you want the crunchiest, thickest bark possible, you won't want to wrap your meat till it comes out of the stall. It may seem counterintuitive, but the proof is in the pudding - or in this case, the delicious brisket.

The only way to figure out your personal preference when it comes to the cooking process is to experiment.

Try wrapping brisket at different points of your cook to find what taste and bark crunchiness best suits you.

Why Do You Wrap It?

Why wrap brisket in the first place? Well, there are three main reasons:

Any large slice of meat will hit the stall temperature. Your large cut of meat, the wrapped brisket, in this case, may be right on track to finishing when you expect it to.

But, as soon as the internal temperature of your barbecue hits 165 F, it stops cooking.

This happens due to evaporation. The meat begins to sweat, causing water to rise to the surface of the meat.

It then starts to evaporate, which in turn cools the cuts of meat. Once your internal temp hits, the stall begins, and it could last as long as 5 hours.

Wrapping brisket allows you to eliminate the air in which moisture can evaporate.

Around the surface of the meat, a layer of the brisket's own juices will form, keeping hot due to the hot air circulating inside your smoker.

The wrap works as an insulator, protecting the meat from direct smoke and heat.

Therefore, you can safely turn up the temperature of your smoker without worrying about burning or drying out your meat.

- Stephanie Pierson, in “The Brisket Book”

Once this evaporation has stopped, your smoker will begin to rise in temperature, continuing to heat your meat.

This is good, since a brisket becomes more tender the longer it gets cooked.

During the competition circuit, judges gave out scores depending on the time in which the smoked meat is delivered.

Wrapping your brisket allows the meat to reach all-time juiciness. Natural juices will be locked in and they’ll be able to tenderize the meat.

Since the cut has already soaked up all the smoke before stall time, you don’t risk over-smoking your meat.

Wrapping brisket will allow you to have control over the bark and appearance of your wrapped brisket.

The average pitmaster will aim for a mahogany-colored bark, which not only looks delicious but tastes delicious too.

Again, this all depends on your personal preference. Some pitmasters wrap brisket as soon as the stall temperature hits, others wait till they get their desired bark thickness and color.

What are The Downsides?

Now, wrapping your beef brisket isn't all rainbows and unicorns. There are a few downsides when wrapping brisket, one being a possible loss of texture.

Once the brisket is all wrapped up, the internal temp will begin to rise.

This rise in temp is rather unpredictable and it can vary on a whole range of things such as how tight the wrap is, how humid your smokers are, etc.

It is a common mistake to follow the recipe when cooking brisket rather than a probe thermometer.

It is far better to cook by temperature and not the time since timing doesn’t really mean anything when faced with mushy briskets.

Every 30 minutes or so, check the brisket’s temperature using a meat thermometer.

Simply poke through the wrapping until the meat hits 203 F. The hole won't affect cooking time, nor will it create moisture loss. 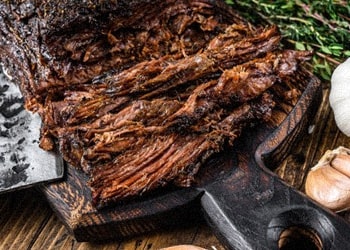 When you wrap a brisket, a barrier forms between the meat and the wood smoke.

Naturally, this will result in a loss of smoke flavor.

Although, it doesn't affect your smoke too much since the brisket has already been exposed to the smoke hours beforehand.

Generally, you won’t notice much of a difference in smoke flavor.

Plus, the wrapping keeps the packer brisket moist, making the bark tastier and the meat juicier.

Now, I know I said wrapping helps the bark crust texture, but bear with me.

Once you wrap a brisket, you’re exposing your brisket edges to extra moisture which speeds up the cooking process. In turn, the bark becomes softer.

To avoid this, you should cook the brisket at 225 F after removing your wrap to make the bark crispy again.

Don’t fret if the brisket quickly cools to room temperature once it’s been unwrapped, the meat will already be tender enough inside.

When it comes to wrapping briskets, there are 2 roads you can go down:

Barbeque experts either use aluminum foil or butcher paper for unwrapped brisket.

Remember the Texas barbeque competition I mentioned? Well, these Texicans sometimes use Aluminum foil on their briskets.

For beginners, wrapping unwrapped brisket in aluminum foil is recommended since it is the easiest way.

Since the aluminum foil is designed to wrap food, it’s only natural to wrap up your brisket in aluminum foil too. It’s also very accessible and cheap to purchase.

Foil is a great conductor of heat, and it’ll speed up the cooking process considerably.

As long as you measure the internal temperature of the brisket every 30 minutes, you won’t have to worry about your bark getting soggy.

To wrap a brisket inside aluminum foil, you should measure two arm-length pieces of foil.

Lay the brisket on top of the two pieces of aluminum foil and wrap the brisket as tightly as you can.

The downside to wrapping the brisket in aluminum foil is the bark will get a little soft during the wrapping process.

If you order brisket at one of the top Texas bbq joints, chances are they’ve wrapped it inside butcher paper.

Unlike aluminum foil, wrapping a brisket in butcher paper allows the smoke to get through while still speeding up the cooking process.

Wrapping a brisket in butcher paper takes practice, and it may take you a few times to get it right. You can purchase butcher paper online or from your local butchers.

A layer of moisture forms on the outside of the brisket, soaked up by the butcher paper.

This moisture keeps the meat cooking by conducting heat, similar to the foil.

The difference being, the butcher paper lets a bit more smoke in, so you’ll gain more flavor than wrapping with foil. The bark will also stay drier.

6 Steps To Wrapping A Brisket

Now you’ve figured out what you’re going to use to wrap a brisket, we now have to learn how to wrap.

Through many smoking and bbq tribulations, I finally found a method that works for me. You may have heard of a method by Aaron Franklin of Franklin barbecue called the Texas Crutch [2].

Aaron Franklin uses a piece of butcher paper around 5 times as long as your brisket.

Here is how you can do it:

And there you have it, the perfectly wrapped brisket. 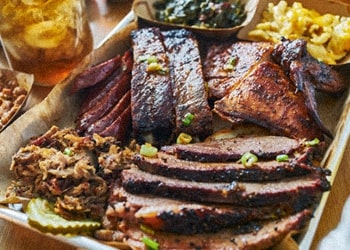 When it comes to flavors of the bbq meat, a lot of people tend to go too complicated with cumin, chill powder, paprika…. When all you need is an even part of salt and black pepper.

This simple style will complement your bark while letting the juicy beef flavor shine through.

The secret to how a great brisket cooks doesn’t rely on fancy rubs, BBQ sauce, or brisket recipes.

It all depends on how you plan on smoking your meat, as well as how you select, prepare, and cooking brisket.

To Wrap Or Not To Wrap a Brisket?

All in all, it comes down to preference. Whether you choose to wrap up your meat or not, the most important thing is cooking at the right internal temperature and for the right amount of time.

Practice makes perfect, so experimenting with different flavors, wrapping brisket technique, and cooking times will get you to that perfect brisket you can share with friends.

Blog 7 months ago
Is Apple Wood Good for Smoking? (7 Things to Consider)

Guides Smokers 6 months ago
How Often to Add Wood to a Smoker? (7 Things to Consider)

Grills 2 years ago
Why Are Built-in Grills So Expensive?
3 Reasons to Consider

Blog 8 months ago
Why Is Brisket So Expensive? (3 Important Reasons)