Brisket Smoking: Fat Side Up Or Down? (Pros & Cons)

Most people do have a preference for cooking beef brisket. Some swear by the fat side down, while others can’t imagine anything better than juicy slices of beef with the fat side up. And some take the middle road and rotate their brisket as it cooks.

We'll take a look at all of these methods and explore the pros and cons of each way to cook.

There are benefits and drawbacks for all sides, but my years of experience making award-winning brisket means I know all the pros and cons of how to cook your brisket even with the fat cap. 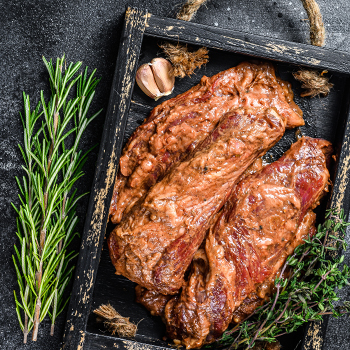 Brisket comes from the pectoralis muscle of the cow.

Because those muscles support up to 60% of the bovine weight, the muscle fibers of this red meat are full of connective tissue that need to be cooked slowly, away from direct heat to increase the tenderness of the collagen [1].

This cut of meat has two distinct sides. A fat layer covers one side while they trim the other side to expose the meat.

Although the meat can absorb moisture, most smokers of competition briskets work to avoid their meat coming in direct contact with intense heat.

Rather, they cook the brisket with a rub or seasoning to keep it moist and for extra flavor.

They may also use foil or a water pan while smoking in order to keep more moisture in the brisket.

Most BBQ experts prize a certain amount of bark formation, and so many pitmasters are very careful how they deal with the extra fat on the one side of the brisket in order to get a better bark. 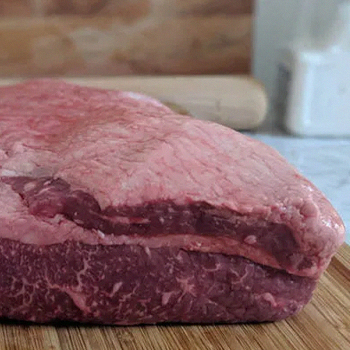 Those who advocate for cooking brisket fat side up base their choice on the belief that the meat will become juicy and flavorful when the fat melts into the meat.

As the brisket heats, flavorful droplets of fat will baste and braise the BBQ.

The low heat and long cook time will break down the fat and render it when cooking the brisket with the fat side up.

This will yield tender, moist slices of brisket that are crispy on the edges but juicy in the middle.

After all, when you have finished smoking brisket, you end up with a drip pan of rendered beef fat in the smoker's bottom.

This melted fat should naturally braise the beef as it smokes on the drip pan, keeping the meat juicy and moist.

Further, the brisket fat cap protects it from the heat from the smoker's top. Particularly in offset smokers, where the heat comes from the top, the fat cap will protect the meat from drying out.

In a non-offset smoker, if you are looking for a thicker bark on the bottom of your brisket, then cook fat side up. The heat rising up against the unprotected underside of the meat will create a fuller bark. 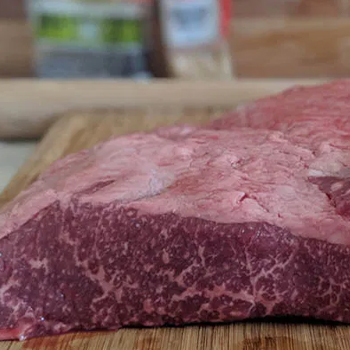 The biggest con about smoking brisket with the fat side up is that its main advantage, the moistened brisket due to fat rendering, really is a complete myth.

After all, meat is a muscle, and muscle is a water-dense organ [2]. Just as oil and water don't mix, neither do fat and muscle.

That is why fat is marbled in some cuts of meat and cannot actually penetrate into the muscle.

This means that the brisket fat cap is not actually braising your brisket and keeping it moist at all.

Instead, you simply have fat cap dripping down the sides of the meat and washing away your seasoning or rub.

Another problem with the brisket fat side up approach is that the grill grates pressed against the bottom of the meat prevent the brisket from forming an even and consistent bark. Instead, some parts of the bark will be thicker than others which leads to an inferior presentation. 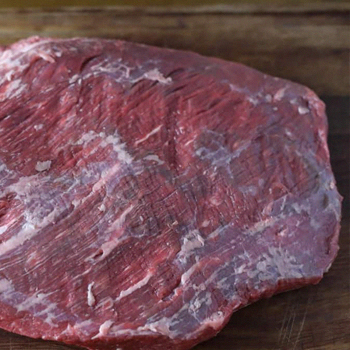 The greatest benefit from smoking your brisket fat side down is that the fat cap protects the brisket from drying out.

Nothing is more disappointing than a dry brisket.

The meat is less likely to dry out during the smoking process by cooking with the brisket fat side down. It adds moisture to your brisket as it cooks, yielding richer slices than you otherwise would get.

The bottom of the smoker has the highest temperatures, and the brisket fat cap acts as insulation and a heat shield against the drying effects of the fire.

This means you get a much more tender smoked brisket.

“With all other foods, there’s a right way and a wrong way. With brisket, there’s only ‘my way.’”
- Phyllis Cohen, Psychotherapist

Additionally, cooking with the brisket fat side down does good things for your bark.

The even heat around the meat leads to the most uniform bark possible.

Because the meat is not directly in contact with the grill, you won't have the presentation side of your brisket stuck to the grate.

In fact, you will have nearly 30% more of the meat available for cooking because the grill will not block the heat and smoke.

Furthermore, many people think the additional smoke that the brisket fat cap creates from fat dripping directly onto the hot coals adds a delicious, strong flavor to it.
Plus, you get access to the meat, not just the fat cap.

This means you can mop your brisket directly - without the fat cap getting in the way. And since the fat cap is on the bottom, you will not have fat cap washing away any of that flavor. 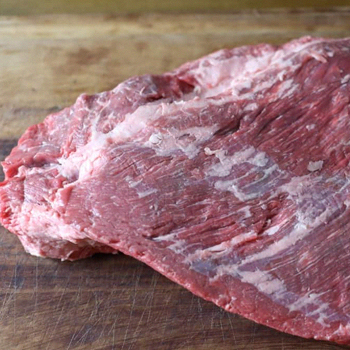 There really are not many negatives to brisket fat side down cooking.

Probably the largest one is that, if you are working in a horizontal offset style smoker, you have the potential to dry out your brisket.

Top heat is the enemy of fat down cooking, so know your smoker type and plan accordingly.

Also, if you cook brisket fat side down, there's a higher chance that the drippings from your meat may land on the bottom of your oven and flare, causing uneven or burnt patches on the brisket. 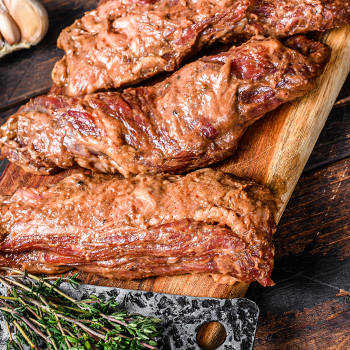 Those who choose to flip when cooking brisket fat side believe they get the best of both worlds.

They usually turn the meat every couple of hours and baste it in order to minimize the chances of the meat side drying out.

In doing so, the brisket has the opportunity to gain a uniform bark and reabsorb some of the moisture lost from exposure to the hottest part of the smoker.

Additionally, the meat is exposed to the melting fat cap half of the time.

If your smoker's radiant heat travels unevenly, then rotating the brisket is even more appealing.

Heat is the foe of a moist brisket. You want to make sure that you do not expose the meat to the hottest part of the smoker for the entire smoking time. Otherwise you will have parts that dry out.

Also, airflow in a smoker is never entirely even.

Thus, if the brisket stays in one position during slow cooking, there is a good chance that some parts will be dryer than the rest.

Flipping at least once during the smoking process can prevent this from happening. If you want the fat to protect the brisket from the heat source, then leave the brisket fat side down for most of the cooking time. 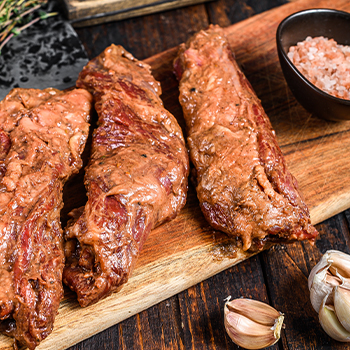 There are some downsides to the flipping process.

The most important one is that turning exerts pressure on the brisket and can tear the fat pad, leading to a loss of moisture.

In order to compensate, you have to baste the brisket every time you turn it.

You will lose less moisture in a good smoker by just letting the brisket sit than you will by flipping and basting.

Also, if you choose to cook the brisket with the fat side up initially, you may still get meat that is stuck to the grill grate - leaving you no better off than if you had been cooking fat side up the entire time.

So start cooking fat side down.

Should You Cook Brisket Fat Side Up or Down?

Clear winner is to cook brisket fat side down.

Not only do you protect the meat from drying out, but smoking with the side down also yields a more evenly cooked brisket.

It's not just about which method better suits your quest for the perfect brisket - the science of cooking leads to the side down being the champion when it comes to smoking beef brisket as well.

There are a few occasions when the fat side down doesn't make the most sense.

First is if you have a horizontal offset smoker where the highest temperatures are at the top. In that case, cooking with the side up may be better - though you'll sacrifice some bark.

Next, if you operate a vertical offset smoker and cook on one of the ends closest to the firebox, turning may make more sense.

Finally, if your smoker has uneven heat, then the rotation may be the best way to keep the brisket moist while you cook.

Of course, another way to avoid dry brisket is to wrap the meat in aluminum foil partway through as you cook your brisket.

Fat Side Up or Down Takeaways

Eating brisket that has been properly prepared is a joy. Most of the time, if you smoke the side down, you will end up with a tender and juicy BBQ treat.

Ultimately, you must understand how your smoker works and where its heat source is located.

Then, you must cook the brisket to place the brisket fat cap between the meat and the heat to ensure the fat acts as an insulator.

Using that cooked fat as insulation from direct heat will minimize the chance of the brisket drying out - leaving you with delicious, melt in your mouth, barbecue smoked brisket.

Guides 9 months ago
How Long Should It Take to Smoke Brisket? (Detailed Answer)

Guides 1 year ago
How to Smoke a Brisket in an Electric Smoker?

Guides 1 year ago
How Long Should You Marinate Chicken?
Everything You Need to Know