Lava rocks - a lifesaver in my case. Only the fact that there is no dust or smoke while I’m making my favorite meal on the gas grill made me addicted to these small hot stones.

The flavor of the slow-baked food, which continues to cook on the cooking surface while I switch off the gas.

Then, the problems begin, starting with bad heat distribution till food poisoning. People I know have advised me to change lava rocks with something else.

Are you wondering why don't gas grills use lava rocks anymore? You can find the exact reasons in the article below, such as alternative materials that you can use instead of lava rocks. 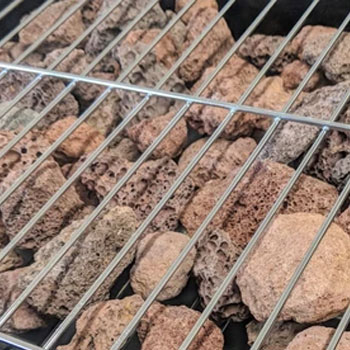 Volcanic lava is a rock formed by the solidification of molten lava or basalt hard rock. Lava rock is created in magma flows and mass ejected from a volcano during an eruption (1).

When initially expelled from the volcano's opening together with magma, it is in a liquid state. It has a temperature of 700 ° C to 1200 ° C.

Lava is quite dense, with a viscosity about 100,000 times the water density. This means that it can flow long distances before it cools and solidifies, thanks to its thixotropic properties and shear thinning.

Lava rocks were introduced in grilling as a solution for creating better smoke flavor. Flame jets from gas grills can't make it, so here's where lava rocks come in. When drippings from the meat fall on the rocks, they create smoke and retain heat.

Because these rocks maintain temperatures, have a high absorption power and reduce flare-ups, people started to use lava rocks in gas grills.

6 Reasons Why Lava Rocks Are Used In Gas Grills

Grills use rocks from lava because of the advantages they have for grilling. Lava rocks form dense embers, distribute heat evenly throughout the grill and prevent flames.

To achieve better results, grills use these rocks because they help maintain the temperature much longer than other materials.

Lava rocks ensure fast food preparation and integrity as it retains heat for a long time. It is a natural product with a porousness, and therefore it absorbs heat very quickly.

The stone retains heat for a longer period, enough to bake steak, ribs, picanha, and even potatoes for each of your guests. It also allows food to be evenly grilled.

The advantage of preparing meat on the cooking surface using lava rocks is also in food quality. The heat of the rock closes the pores of the meat and retains its juices and taste.

Oil or fat are not required, which makes the preparation of grilled food on lava stones healthy.

Recommended Article: Simple Ways to Put Out a Grease Fire on a Grill

2. We can use these stones in gas grills multiple times.

Gas grills use lava rocks because you can reuse them. An interesting thing about lava rocks is the fact that they do not burn. They just heat well the surface area, so you can use it for a long time. After the grilling is over, you can freely pour lava rocks with water and use it again tomorrow.

Lava rocks are porous; they are made of hard basalt rock and can last long. With regular average use on a gas grill, lava rocks should last for about two years, and then you should replace them.

The main reason for replacing lava rocks in a gas grill is the build-up of grease, which can affect the food's flavor.

Frequent heating and cooling can also affect the natural deterioration of the lava rocks, so replacement is necessary after some time.

Natural lava stone perfectly transfers heat from a stainless-steel burner to grilled dishes, making the whole barrier hot. As a result, you'll have food with wonderful flavor every time.

They can also prevent drippings, unwanted combustion, and the formation of harmful substances.

Since lava rocks are porous, the amount of lava pores they have effectively absorbs fat droplets and prevents harmful substances from dipping and unwanted fat burning.

According to the Hearth, Patio & Barbecue Association's (HPBA) study (3) almost two-thirds (64%) of U.S. adults own a grill or smoker. But not all of them can do it outside.

Gas grills with lava rocks store the heat of the flame, even if it no longer burns. Lava rocks do not smoke in such significant quantities as charcoal and usually wood or pellets.

That is why a grill that uses lava rocks can provide great "smoky" food not only outdoors but you can also use them in your kitchen.

“Cooking is a subject you can never know enough about. There is always something new to discover.”

Although lava rocks have their good points, users have noticed disadvantages while using them in the gas grill over time. Here are several reasons why we don’t use lava rocks anymore in gas grills.

The disadvantage of using lava rocks in gas grills is intense smoke that sometimes occurs when grease drips on the rocks. This happens because lava is a porous stone, and when it gets full of the fat from baking starts, it starts to smoke heavily.

Another reason why gas grills don’t use lava rocks is the heat distribution on a grilling surface. People have noticed that lava rock prevents the even distribution of the gas flame’s heat.

To distribute the heat evenly, the stones must also be cleaned regularly after use, which users often forget.

Users have often pointed out easy cleaning as a good thing about lava rocks usage. They can be boiled in water and detergent, dried, and reused.

Looks easy, but unfortunately, after some time, you have to repeat the procedure. Users often forget that they have to clean them from time to time, which has usually caused more trouble than good.

After a few baking, you should change them to avoid the unpleasant odors left by the previous cooking remnants (such as the fat that runs from the sausages, etc.).

Failure to do so can lead to food poisoning, which is undoubtedly the last thing we want to happen when preparing food.

These shortcomings have led to more and more people opting for some other types of materials that would have a similar effect as lava rocks. 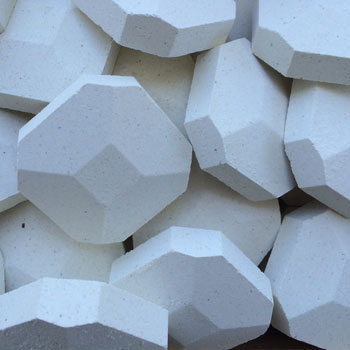 Here's where the question: "Why don't gas grills use lava rocks anymore?" gets an answer. There is a new material that gas grills can use and replace lava stones with.

Ceramic briquettes are becoming an increasingly popular option for gas grills and play a significant role in regulating the even distribution of heat.

They are made of quality ceramics that retain heat for a long time and evenly distribute the temperature when baking over the entire length of the grill.

Due to these characteristics, ceramic briquette helps reduce gas consumption during cooking and helps improve the flavor of food cooked on the grill, making it healthy, without additional fats.

A ceramic briquette is available in various shapes, including rounded briquettes, pyramid-shaped briquettes, and other options that allow grease to flow, allowing for easy maintenance and cleaning.

Why is Using a Ceramic Briquette a Good Option?

A ceramic briquette is primarily an alternative to solid fuels such as wood or coal.

It has several advantages over other solid fuels used in charcoal and gas grills, such as:

If you have a gas grill that you have used lava rocks with in the past, you can continue using it with briquettes.

They do not require any particular stove or boiler, so you can use them for almost any gas grill. Make sure you have enough in the heat box to create at least one layer across the gas grill.

What are the Benefits of Using Ceramic Briquettes?

Ceramic briquettes are used by heating them with gas burners, and this temperature further heats the grate above which we bake.

Ceramic briquettes are increasingly used because they can self-clean, reduce the possibility of ignition, have a long service life, reduce cold zones and stay hot longer.

They are not porous and do not accumulate fat. They are very easy to maintain. It is enough to burn ceramic briquettes well after each grill in the grill itself.

They have good characteristics of lava rocks

Ceramic briquettes have almost the same characteristics as lava rocks. They are helping to reduce flare-ups while grilling so they can provide a safer result.

They have a possibility of quick absorption of the heat which they can use much longer. In this way, you can continue cooking using the heat from the briquettes even when you turn off the gas.

They do not retain fat

Due to the materials from which they are made, they do not retain fat, which is a great advantage over lava rocks.

Ceramic briquettes are improving heat distribution, eliminating better than lava rocks cold spots on the gas grill. They hold the heat longer and less messy than lava rocks. By making the whole barrier hot, they prevent the risk of flare-ups and drippings.

These advantages mentioned above and the quality materials made allow us to reuse ceramic briquettes in gas grills better than lava rocks.

The high-quality ceramic used in ceramic briquettes increases their lifespan and reduces the need for cleaning and food poisoning risk. You can reuse them multiple times as they are self-cleaning.

After you light it up to your gas grill, ceramic briquettes through quick absorption "suck" as much heat as possible. That way, you can just cook your food using the heat from the briquettes and turn off the gas.

In this article, we discussed how ceramic briquettes can replace lava rocks. They will keep the heat retention on your grill, prevent drippings from grease and oil and reduce the risk of flare-ups, making tasty food on the cooking grates. Just like the one you had when you were using lava rocks.

The truth is you don't need lava rocks anymore for the smoky flavor of your meat. But briquettes have specific issues: users consider them as costly, and their share is sometimes not the best for grilling.

They also didn't solve the burner rot issue because grease and oil can still rain onto the surface area when you cook. Have this in mind next time when you start grilling your meat.

Purists will tell you that for the best smoke, nothing can replace charcoal grills. And we partly agree.

Still, make sure to use ceramic briquettes for your gas grills as they provide security - you will get the same flavor of the food as with a charcoal grill but without smoke and risk of fire.

Blog 8 months ago
Why Is Brisket So Expensive? (3 Important Reasons)

Guides Smokers 7 months ago
Water Pan For a Smoker (6 Reasons Why You Should Use It!)

Grills 2 years ago
Why Are Built-in Grills So Expensive?
3 Reasons to Consider

Blog 9 months ago
Why Does My Smoked Meat Taste Bitter? (3 Main Reasons)

Blog 8 months ago
Why Is My Smoker Smoking Too Much? (5 Main Reasons)