There are several delicious cuts of meat that come from cows. Tri-tip is undoubtedly among them - it is very popular, but still many people don’t know how to handle it.

The main issue about tri-tip is cutting. This can be complicated because of the grain and muscles going in different directions, which makes cutting this piece of meat quite a challenge.

Are you wondering how to cut tri-tip and why this is important? After 48 hours of research - learning and trying - we feel confident to answer these questions.

What is Tri-Tip Steak? 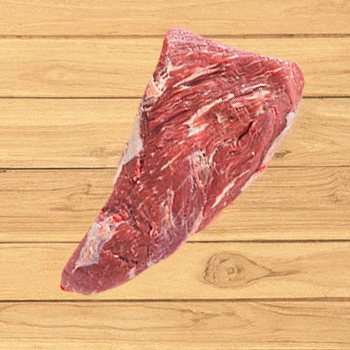 A tri-tip is a cut of meat from the underside of the sirloin of a cow. It comes from the toughest muscles on the bottom sirloin, where different areas of muscles meet.

There are only two tri-tips in the cow, one on each side. It is a steak with many marbling, boneless, around 1 inch thick, thicker in the center, and thinner near the outside edges. It can weigh about 1.5-3 pounds, and it is enough for four or more people.

Tip cut has a low-fat content, it is juicy with a nice, beefy flavor, but you will get this result only if you cut it properly and cook it well.

How Tri-Tip Steak Got Its Name

The name tri-tip comes from its triangle shape, with one side shorter and the other turn slightly longer, so it resembles a boomerang or crescent. A long time ago, this cut was served as ground into hamburgers or stew due to its toughness.

In the late 1950s in Santa Maria, CA, butcher Bob Schultz separated the triangle-shaped cut of beef and grill it like a steak. He first gave it the name Santa Maria Steak, which is still sometimes used, especially in California. After a few years, he named it tri-tip.

Should I Cut It Before or After Cooking?

People are often asking if they should cut tri-tip steaks before or after it is cooked. You can choose any of these procedures, but I recommend you first cook it and then do the slicing.

There are several methods of how it can be cooked - you can broil it, roast it, grill it or smoke it. Don’t overcook it because it will be rubbery and tough. Bake it medium-rare. You can also add olive oil for better results.

After you prepared it in your favorite way, cover it with foil and let it rest for at least 10-15 minutes. Don’t skip this step!

The resting period will help your beef to be juicy - its natural juices will reabsorb, settle down and stop flowing. If you cut it before resting, the juices will flow out, and the steak will remain dry.

“Roast beef, medium, is not only a food. It is a philosophy.”

How to Cut Tri-Tip Properly

Cutting the tri-tip properly is as important as preparing it right. If you don’t do it correctly, your beef will change its structure, won’t roast correctly, and slices will be chewy and tough.

As we have already mentioned, tri-tip contains two different grain directions, which makes cutting more difficult. It would be good to slice the tri-tip against the fibers – first cut it in half, then slice each piece.

1. Use the correct tools.

For proper cutting, you will need correct tools like those for cutting and serving, which you already have in your kitchen:

Once cooked, this meat cut has to be sliced across the grain. It will be easier to find it before seasoning when the meat is raw.

Check the beef cuts before cooking to determine the directions muscles and fat go through the meat. You will see two different grain patterns, which are cutting vertically in the seam of fat.

This seam is splitting the tri-tip roughly in half, but probably with one side longer than the other. On the smaller cut, the fibers run vertically, and in the longer half, they run diagonally.

Turn the heat on and roast the steaks.

4. Leave it to rest and then slice it.

The right thing to do after cooking is to let the beef rest. Leave it at least five minutes before cutting it in half from top to button. Slice it correctly to have the perfect cut which will fit every recipe.

You will get two different size halves, but each with the grain. Take one half and inspect its grain again. Cut the slice against the grain. Make sure to angle the knife to cut the perfect slice.

When you finish with the first, take another half of beef. Inspect its fibers; they will be differently oriented than in the first piece. Take your time and slice it by repeating cutting against its grain directions.

It is essential to know that the grain will change direction at one point. You’ll have to rotate your tri-tip then and keep cutting slices against the new grain direction.

In the end, when you finish slicing off your tri-tip properly, you will have several perfectly cut slices and tender pieces ready for tasting or making your meal from your favorite recipes.

Because of its flavor and tenderness, tri-tip is a popular cut of beef. But, its triangle shape can seem confusing, especially when you cut it for the first time.

Even if you are experienced in cutting, it is crucial to know how to slice tri-tips to get perfect and tender cuts. Please don't be scared; slicing it is pretty simple, even for beginners.

Every time you finish with baking, you need to discover the grain's direction, take the knife and cut it into slices. Find top recipes, gather ingredients, and make the best and tasty roast slices and steaks for any occasion.

Blog Meat Delivery 3 days ago
What Is the Best Cut of Steak? (Here Are the TOP 11)

Blog 10 months ago
Brisket Point Vs Flat Cut
Which One to Choose?

Blog 4 months ago
Angus vs Wagyu Beef (Which Cut Is Better?)

Guides 3 months ago
What Are Baby Back Ribs? (An Exquisite Rib Cut)