Porterhouse and ribeye steaks are two of the most popular beef cuts with steak lovers.

They're both amazing, but they have some subtle differences that make them each unique and worth exploring.

The difference between porterhouse steak and ribeye steak is more than just how they are cooked.

As someone with twelve years of experience grilling competition-level steaks, I know firsthand how much of a difference the cut makes.

Let's take a look at the differences between these two cuts to help you decide whether the porterhouse or ribeye is right for your next grilling session. 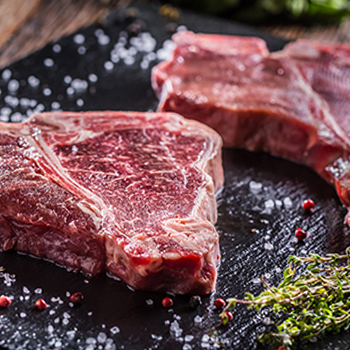 The porterhouse is the go-to steak for a lot of restaurants and can be the most expensive cut on a menu. It is also far larger than other steaks, often weighing 18 ounces up to two pounds.

It is the perfect steak cut for a cooking enthusiast who wants something more than a standard rib eye or filet mignon.

Hard to miss, a T-shaped bone separates the top loin and tenderloin, which is what makes it such a flavorful cut.

Like a T-Bone steak, the porterhouse is composed of two different muscles:

Each with its own unique flavor and fatty nature.

In fact, the porterhouse and T-Bone steak are basically the same cut; they just differ on how large the strip to tenderloin ratio is.

The strip has lots of muscle fibers which make for an extremely flavorful piece of meat. It also has less fat than the tenderloin.

The loin side is softer and more delicate in flavor since it doesn’t have as many connective tissue fibers as the strip steak does. 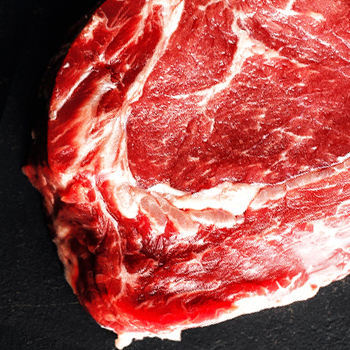 The ribeye derives its name from where it originates - near the upper rib cage of the cow.

A rib steak is taken from the back of a cow, which accounts for its high levels of marbling and hearty flavor.

Also known as a market or beauty steak, Scotch fillet, and Spencer or Delmonico steak, the rib steak is a very popular restaurant cut because of its consistent shape and size.

The uniformity of the meat leads to versatile cooking methods, and it’s a favorite with chefs and backyard cooks alike.

One of the richest steaks, it's often considered an expensive or premium cut because it has more fat marbling through it than many other cuts of beef. This marbling makes it very flavorful.

The high fat content can make the cut seem too greasy for some, but others love the rich taste and "beefy" flavor of rib steaks. One of the most flavorful cuts, some think it is the best steak out there.

Where Do They Come From?

Porterhouse steaks originate from the lower rib portion, close to the rear end of the cow’s anatomy, which yields both the tenderloin and the top loin.

The ribeye is cut from the back rib section along the rib primal of the cow. This area is the same location where prime rib arises, but they harvest this steak from between the cow’s ribs. 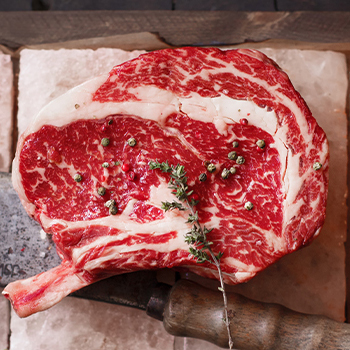 Since the porterhouse consists of two different steaks, it is no surprise that they have different fat levels.

The tenderloin portion of the porterhouse is lean and delicate, with a lower fat content. The New York strip has a higher amount of fat.

This means that there is something for everyone to love about the porterhouse.

Because the rib eye comes from the muscles between a cow's ribs, it is meat that has seen relatively little work.

Unused muscles tend to have higher fat content than muscles that receive a lot of exercise. Thus, the ribeye cut has more fat marbled throughout the steak than the porterhouse.

The texture of these two steaks is also different because they come from such different parts of the cow.

For the porterhouse, the tenderloin on one side is softer and smoother to cut than its counterpart on the other side of the bone.

The tenderloin steak will be buttery and delicate in its texture as fewer connective fibers run through this cut of beef.

However, the strip side has a wonderful chew to it. This is mostly because of those extra connective tissue fibers that give meat its bite resistance.

The ribeye, with its marbling, is tender right off the grill. It is not as soft as the tender cut of a porterhouse steak, and its tenderness is less like that of a filet mignon.

The looser grain means the ribeye is quite tender but still has some resistance to it. 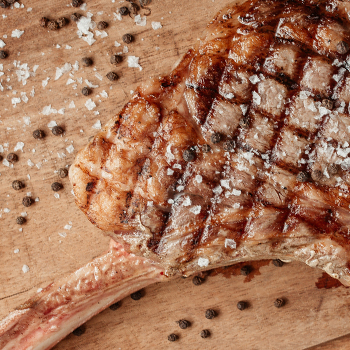 You can readily identify a porterhouse steak by the large center bone that divides it in half.

The positioning of this one bone is what distinguishes the porterhouse from other cuts, despite its resemblance to a T-Bone steak.

The porterhouse cut can be differentiated because it has a larger tenderloin section than a T-Bone steak does.

The ribeye can look a little confusing because it may either have a bone or not. Boneless or bone-in ribeye steaks are available, though neither cut changes the composition of the meat itself.

Some prefer boneless cuts for their simplicity of cooking and the consistent sear you can achieve with them. Others prefer the bone-in version due to the purported juiciness and flavor that the bone adds [1]. 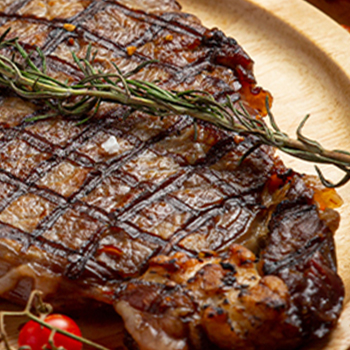 Of course, the price of beef is always changing, so the best I can do is offer a general comparison between the cuts.

Overall, you can expect to pay more for ribeye steak at the grocery store or butcher shop. This is because the cut comes with more marbling and is more popular than the porterhouse.

You will also find that a ribeye without the bone will be more expensive than a bone-in ribeye.

Say that the average price for a boneless ribeye is $14-$15 per pound; you will probably find the other version one to two dollars cheaper.

Porterhouse steak will be even less expensive, as no one expects the consumer to pay for the weight of the large bone.

As such, your price should be another one to two dollars less than the ribeye with a bone [2]. 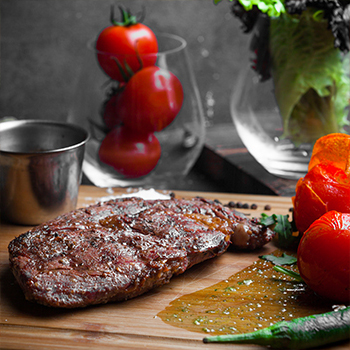 There is no doubt that a boneless ribeye is one of the easiest cuts of beef to cook.

You can get a good sear on all sides and end up with tender steaks right off the grill, without needing a lot of cooking tips.

The only potential downside to this cut of meat is that you may get more flare-ups because of its high fat content and a little more of the burnt flavor on your steak.

For this reason, many people find pan-frying to be their preferred cooking process.

However, those who prefer a more traditional steak experience may enjoy cooking their ribeyes with the bone in. This process reportedly helps to improve the steak taste.

“The only time to eat diet food is while you're waiting for the steak to cook.”
- Julia Child, Chef

On the other hand, it is harder to cook a porterhouse steak because you must flip and turn it in order to get an even sear on both sides of the meat.

Additionally, the meat closest to the bone cooks slowly as compared to the meat further away. This means you have to watch your steak very carefully.

And, of course, never forget that you are actually cooking two steaks at once with the porterhouse.

The tenderloin will cook faster than the strip side, so you want to position the meat with the tenderloin side farther away from the heat than the top loin. Like everything about steak, there is a lot of personal preference when it comes to flavor. The perfect steak for one person may not be the perfect one for another.

But a good ribeye steak is universally acclaimed as having a wonderful meaty flavor to satisfy the taste buds.

This is due to the fat intrusions and marbling within the steak.

Porterhouse steaks may not have quite the explosive deliciousness of the ribeye, but because it contains both a strip and tenderloin, it yields a wonderful combination of flavor and tenderness.

However, those who prefer a more traditional steak experience may enjoy cooking their ribeyes with the bone in. This process reportedly helps to improve the steak taste.

“The only time to eat diet food is while you're waiting for the steak to cook.”
- Julia Child, Chef

On the other hand, it is harder to cook a porterhouse steak because you must flip and turn it in order to get an even sear on both sides of the meat.

Additionally, the meat closest to the bone cooks slowly as compared to the meat further away. This means you have to watch your steak very carefully.

And, of course, never forget that you are actually cooking two steaks at once with the porterhouse.

The tenderloin will cook faster than the strip side, so you want to position the meat with the tenderloin side farther away from the heat than the top loin.

Since the initial introduction of the porterhouse and ribeye cuts, steak lovers everywhere have had a lot of discussion about which is better.

The last thing I am here to do is start a fight, so I will just say that who wins in the porterhouse vs. ribeye debate all depends on what you are looking for.

The ribeye steak has an intense flavor due to its being a bit fatty and its excellent marbling within the steak. Also, it is simple to cook and get great results.

On the other hand, the porterhouse steak offers two kinds of meat (strip and tenderloin) in one cut with rich flavor and an extremely tender texture.

No matter which steak you choose, you will be rewarded with a tasty and exceptional cut of beef.

If you're looking for something simple or want a meal that yields lots of juicy goodness from every bite, then go with a boneless cut of ribeye.

If you prefer your steak big on the size as well as flavor, then a porterhouse might be the right choice for you.

There is no wrong way to go with porterhouse vs. ribeye - it's all about what you're in the mood for.

By Iva Carter 10 months ago
T-Bone vs Porterhouse Steak (Which One Should You Choose?)

By Iva Carter 1 year ago
Flank Steak Vs Skirt Steak
Which One is Better?

By Iva Carter 2 years ago
Ribeye vs Prime Rib Steak
What’s the Difference?

By Iva Carter 2 years ago
What Is a Tomahawk Ribeye Steak?
How to Cook It on a Grill or Smoker?